CHARLESTON, WV – Charleston’s Rock Steady Boxing program for people with Parkinson’s disease was initiated in June 2016. The international boxing-based exercise platform (www.rocksteadyboxing.org) was started in Indianapolis and helps people battling with Parkinson’s with strength, stamina, agility, balance and more. There are over 500 Rock Steady affiliates around the world with almost 20,000 participants. The Charleston Rock Steady program is only one of two Rock Steady programs offered in West Virginia.

“I’m inspired every day by the effort, determination, and grit that each person gives,” said Jamie Tridico, owner of Advanced Physical Therapy, and the class leader. “It has been incredible to see the progress in every person who participates.”

The class is part of three free exercise programs offered by Tridico and the Charleston Parkinson’s Support Group. The exercise class schedules, as well as the schedule of support groups, can be found under the Resources section on this website.

The Charleston Parkinson’s Support Group also unveiled a new video, produced by Filmanatix, promoting the Rock Steady Boxing program and the results that it is having in the daily lives of its participants.

“In just five years, the Charleston Parkinson’s Support Group has established free exercise programs, two monthly support groups and 5K race that raises over $50,000 annually for Parkinson’s research,” said George Manahan, support group coordinator. “We are proud of the impact we are making in people’s lives.” 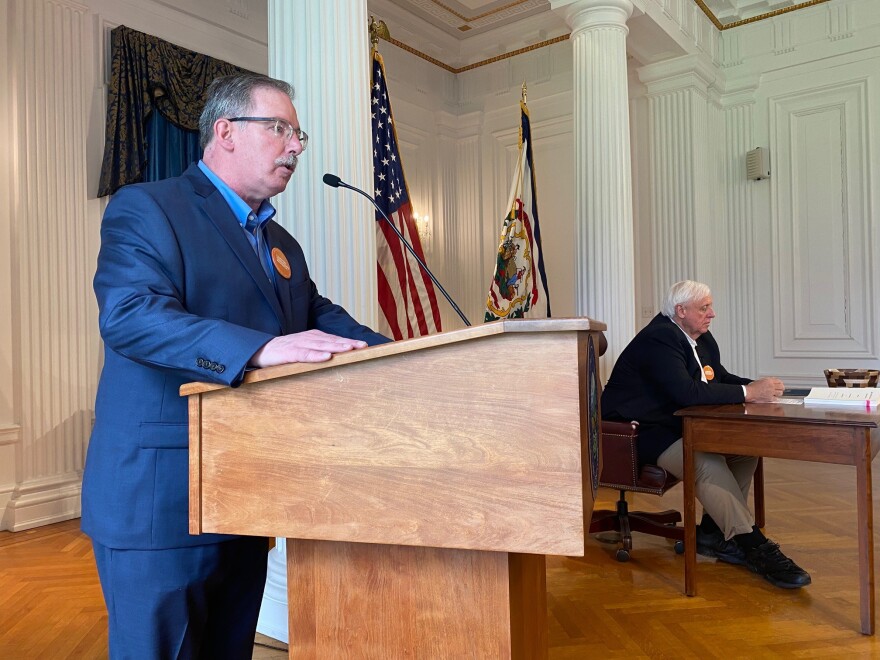 WV Parkinson’s Registry Will Help Search for a Cure

CHARLESTON, WV (April 11, 2022)  – There is no cure for Parkinson’s disease, but new efforts in West Virginia may help speed therapeutic research.

West Virginia is believed to have the nation’s third highest population with Parkinson’s disease. But that’s an estimate. The numbers may be higher. Experts say the research is lacking, and there is still too much unknown.

“It is the first step to putting us on a pathway to solve the riddle,” Justice said.

George Manahan is a West Virginia business leader and activist who lives with Parkinson’s. He said the charting project will collect statewide data that medical experts say will lead to new research findings to help stop, slow or reverse Parkinson’s.

Manahan said the more than 7,000 West Virginians who also live with the degenerative brain disease can help provide answers.

“Our new registry will provide solid data of how many people in our state have the disease and where they live,” Manahan said. “We’re going to look for clusters. Are they in a certain location? Do they work in a certain industry? Hopefully the data will lead us to answer questions like what causes Parkinson’s disease, and can we find a cure.”

Manahan said the data collected will be used by in-state researchers that can enter into an agreement with another state registry. The data will also be sent to the Center for Disease Control and Prevention, where it can be used by national and international researchers. Manahan said growing the database will widen the search for a cure.

Dr. Ali Rezai, of the WVU Rockefeller Neuroscience Institute will lead the registry effort. Along with WVU, registry research will include doctors and patients from Marshall University and Charleston Area Medical Center. Rezai said West Virginia is already a national Parkinson’s treatment leader.

“We have patients from 30 states come to West Virginia for the care of their Parkinson’s,” Rezai said. “We are leaders in the world for advanced therapeutics with deep brain stimulation, focused ultrasound, treating Parkinson’s tremor and gene therapy starting in a few months.”

West Virginia is the first state to partner with the Michael J. Fox Foundation in establishing a registry.

West Virginia is also the first Appalachian state and first rural area to have a Parkinson’s registry. Rezai said the work here is long overdue.

“Many of the studies are done in large metropolitan cities,” Rezai said. “It’s time to learn more about what happens to the Parkinson’s community in Appalachia and rural states.”